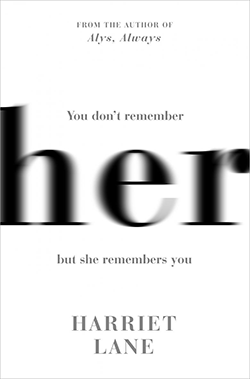 (Warning: because I wanted to discuss this book in detail, my review below contains more spoilers than usual. Not with regards to specific plot points, just general developments, but you may want to avoid reading it in full if you are planning to read the book and want to be surprised.)

Her is the second novel from Harriet Lane, author of the wonderful Alys, Always. It is the tale of two women, Nina and Emma, who tell their own stories in alternating chapters. When the characters meet - or, more accurately, when Nina sees Emma in the street - there is an instant flare of horror, panic and fascination on Nina's side. Straight away it is clear that the characters have encountered one another before, and that whatever interaction they have had, it has left a mark on Nina - but not on Emma, who fails to recognise Nina. The plot presents an immediate, obvious mystery: what can possibly have happened between the two women to make Nina obsessed with Emma, while Emma doesn't remember Nina at all? After a period of contemplation - 'I'm scared of seeing her, and I'm scared that I'll never see her again' - Nina finds a way to initiate contact with Emma, and strikes up something Emma sees as a new friendship, but Nina (and the reader) knows to be a deliberate and carefully plotted campaign to insinuate herself into Emma's life. For her part, Emma is quickly taken in by Nina, the kind of cool, calm and collected woman she wishes she could be.

Emma is an immediately likeable character, the sort of person everybody knows multiple versions of in real life, friendly and rather unremarkable, nice but (on the surface) altogether ordinary. She is clearly on the very-privileged side of privileged, but struggling in a number of ways, and has none of Nina's composure. Although she loves her children, motherhood has not been what she hoped (and I have to say, if I wasn't already horrified by the idea of having kids, I probably would be after reading this). Emma is always tired and unkempt, is jealous of her husband's ability to continue with his career unaffected, and feels lonely, distanced from both the world of work and any sort of social life. Her emotions towards both her husband and her children switch between love and resentment, and overall, her existence is one of exhaustion and perpetual dissatisfaction. Emma resembles the 'put-upon young mother' stereotype so common in popular contemporary fiction, but here the well-worn caricature is fleshed out into something that actually resembles a real person, someone you can understand, relate to and believe in.

Nina is altogether more complex and difficult. In Nina, we have someone who perhaps resembles Frances of Alys, Always a decade or more into her social-climbing project. She is the daughter of a successful composer, but often hints at a difficult childhood: her father a philanderer, her mother eccentric and with a tendency towards alcoholism. She is sleek, sophisticated and glamorous, and everything (or almost everything) in her life is beautifully ordered and controlled. Nina has a teenage daughter, distant and pretty, and is married to her second husband, a quiet, unobtrusive presence in her life. When she speaks of her first husband, Arnold, it is often with the language of gratitude:


Sometimes it felt as if Arnold, with his confidence and generosity and taste, had willed me into existence, suggesting as much as fostering the characteristics which are now so much a part of me. He turned my shyness into reserve, my guardedness into self-possession. He brought me out of the shadows. All this talk of 'finding yourself': often, other people show you yourself first.

If Arnold was Nina's ticket to the life, and the self, she craved, he has long since been discarded; tellingly, 'he knew too much. He'd seen both sides.' Nina is an artist, but it seems as though she has enough money to stop working, should she want to. There is clearly no financial or social motivation for her pursuit of a friendship with Emma. Nina often alludes to the idea that Emma was once 'perfect' and has somehow fallen from grace - something she regards with both delight and disgust. Every aspect of Emma's life provokes an obsessive instinct in Nina, and there is a manipulative cruelty to the way she pursues her quarry with small, insidious acts, but this preoccupation with Emma is one of the only things that rattles Nina and therefore one of the only things that humanises her. In the opening pages, her feelings upon sighting Emma are 'overwhelmingly powerful: like panic, or passion.' It's these cracks in the armour, these glimpses of vulnerability that make you desperate to get under the skin of the character.

I've read some reviews of Alys, Always that criticised it for being a psychological thriller that wasn't thrilling enough. I don't agree with this assessment at all, not least because I don't think Alys, Always actually is a psychological thriller, and also because that absolutely isn't the point of the story, but anyway. My point in mentioning it is that I am sure that those readers will feel the same about Her, which has also been positioned as a thriller: when the Big Reveal of the Big Twist comes, the moment the whole book has been working up to, it isn't anything much at all. Does this mean it's disappointing? Not at all - quite the opposite, in my opinion. The fact that the root of all this is such a tiny thing, and something entirely beyond Emma's control or even knowledge, makes it all the more delicious, strange and unnerving. It also suddenly tilts the character of Nina entirely and makes her seem much more unhinged than the reader may have previously supposed. This sets the tone for a dramatic cliffhanger ending which leaves the characters' fate, and the aftermath of these climactic events, open to the reader's interpretation.

It takes a special kind of talent to replace an expected big revelation with a small, unremarkable one and still make this feel as big and meaningful as the most lurid of twists. In fact, examined more closely, the book is full of moments like this. For example, it is frequently implied that Nina is flirting with Ben, Emma's husband, and you wonder if she is going to try and seduce him - it seems as if it would be easy - but nothing Nina does is that obvious. This is a book of subtleties. In fact, Nina herself spells out the truth of her tale. After speaking to Ben about a book he's reading, she observes:


I don't say that I've read it and enjoyed it, though I found the final plot twist unsatisfying, as plot twists often are: nothing like life, which - it seems to me - turns less on shocks or theatrics than on the small quiet moments, misunderstandings or disappointments, the things that it's easy to overlook.


'I don't think I like these characters,' he's saying: an annoying remark, one with which I can't be bothered to engage.

I didn't find Her to be as immediate or as continually gripping as Alys, Always, but after finishing it, I couldn't stop thinking about it for weeks. It took me a while to get round to writing this review but, once I started re-looking at the book to jog my memory, I found that I really wanted to read it again. Her doesn't grab you by the collar and refuse to let go: it creeps up on you and worms its way into your head until it feels like a part of your reality. Nina and Emma are so fully-formed and well-realised that I find it almost impossible to believe they aren't out there somewhere, living these lives. This is a tightly plotted novel that is taut with suspense but, more than that, it is a wonderfully intricate, rewarding character study that demands to be re-read and savoured.

I received an advance review copy of Her from the publisher.

Popular posts from this blog

October 31, 2014
Crooked House was first broadcast on BBC4, at Christmas in 2008, as three half-hour episodes, and later released on DVD as a film-length single cut. Designed to fit into the 'ghost story for Christmas' tradition, it's a potent combination of historical ghost story and modern horror. Mark Gatiss, who also wrote all the episodes, stars as the Curator; his conversation with Ben, a teacher played by Lee Ingleby, opens the series, and the stories that follow are ostensibly local legends related during that conversation. Crooked House works well as a portmanteau, but it can also be treated as three self-contained stories. 'The Wainscoting' is set in the Georgian era, 'Something Old' in the 1920s, and 'The Knocker' in the present day. Linking them all together is a good old-fashioned haunted house, the evocatively named Geap Manor, a place that 'seemed to attract unpleasantness'. It's the setting for the first two episodes, and although it
Post a comment
Read more

December 23, 2015
This year I've decided to split my list of favourites in two - one post for the first half of the year, one post for the second - so I don't miss out on including anything amazing I read in what remains of December. And because there are too many books to fit in one post. Here are the best books I read between January and June 2015. Books from this year The Ghost Network by Catie Disabato I have very happy memories of reading this on a beach, on an uninhabited island, in Portugal - no, wait, that isn't the recommendation. And it would have been brilliant no matter where and when I read it. The Ghost Network  is about: a missing pop star named Molly Metropolis; her fans; situationism; psychogeography; and Chicago's public transport system. Part faux-academic text, part conspiracy thriller, part postmodern, ultra-meta reflection on fan culture, it was SO much fun to read, kept doing unexpected things, and had me on the edge of my seat all the way through. T
1 comment
Read more